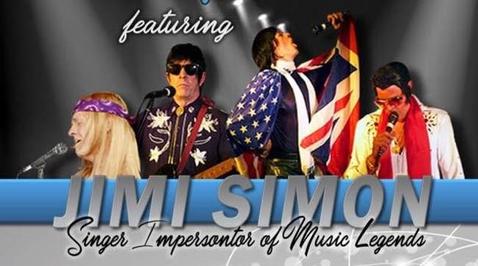 The ONE MAN BAND

As co-founder and former leader of the

Original Fabulous Hubcaps for over 3 decades,

Jimi is well known for his pursuit & provision of excellence in all aspects of the music business.

With the ability to cover 4 octaves vocally, very few artists can offer such a variety of the greatest jazz, rock, soul & country music ever recorded .

Here are just  some of the artists you will experience the sights and sounds of:

One of the most requested tributes is that of the Rolling Stones front man, Mick Jagger.

The full production of Jimi's "Greatest Legends of Rock & Soul Show" include impersonations (in costume) presented in a "Las Vegas" style floor show.

For smaller venues and budgets, there is  a show with limited or no costume changes.

​I use accompaniment tracks of instruments and backing vocals that I have recorded and play piano & guitar and sing live. I also offer DJ/MC, Karaoke & Dance Party Services. (Line dances & more)

If you would like to discuss your entertainment options and plan for an upcoming event,  please contact me .

I look forward to working with you.

"No gig too big, no hall too small"